If you look at the picture, that’s me in the middle, but Asian and a little younger. The co-workers, cubicles, haircut, simple black sweater and coffee mug are on the mark.   I had transitioned out of education to work in what I thought would be a nice office job. I would to sit at a desk, answer emails, design marketing material about technology and its uses in education, and have meetings with adults. No more lesson plans and disciplining children. What I didn’t expect was a different type of disorderly behavior…

As soon as I was hired on, my co-workers hated me. They spread rumors, whispered and laughed behind my back. One man (they were all in their late twenties to early thirties) taunted me constantly for working so hard.  Then he’d share stories, many disgusting, about how great he was.  When he discovered I was Christian, he’d tell me repeatedly that he was the devil. He was trying to scare me.  My co-workers even  convinced our director that I should trade cubicles with the printer because my cubicle was bigger and the printer needed more space and was presumably more valuable.  (It was a $10,000 printer.)  A couple of months ago in graduate school,  I had been engaged in intellectual and ideals-driven conversations about standards-based reform and educational policy for language minority students. Now my deepest questions were how to how to deal with a bully and navigate office politics.

I eventually figured out why they hated me. One of the men in our group was a contractor. He had been wanting employee status for quite some time and had been denied it over and gain. Meanwhile, right out of school, single with little corporate experience, I was hired with employee status and full benefits.  (My husband has been contracting for two years hoping to be hired as a regular employee so I can understand how he felt.)  They hated that I was from Stanford, seemingly privileged,  and so overly industrious and eager. They loathed our director and organized against her.  I soon realized that the environment had been toxic for quite some time.

Eventually, this dysfunctional group tried to pull me into their cabal.  Each Friday at lunch, they’d  ask me what I wanted from Fry’s Electronics.  Each week I said I didn’t need anything. The co-worker who called himself the devil started telling me that there was  money in our budget to “try out” technology and  that I could get anything I wanted. Unbelieving, I asked for a keyboard to use with my Palm Pilot (a smart phone precursor) and less than an hour later I received it on my desk. I had no idea who was signing off on these purchases.

When they needed me to cover for them, these coworkers became very friendly and nice. I became their backup for arriving late to appointments with customers or partners. I held down the fort and filled in when needed. I became useful and used.

Then one day this group of coworkers asked me to meet them in one of the rooms. “Come on, Tina. Join us. ” Something secretive and exciting was going on. Still unsure why I was invited to join the party, I found out that they were stealing technology–computers, software, cameras, etc. Layoffs were imminent and all the equipment would soon be useless. Someone drove up to the door leading outside in a van and someone else had turned off the video cameras. I walked out of that room quickly. I could not believe what was happening.

As for my actual work, I created some very shiny marketing material about the use of technology in educational settings and gave input (that no one ever listened to) which questioned the efficacy of their multi-million dollar marketing campaign for schools. The company I worked for wanted to sell its networking hardware to school districts and universities and its marketing program touted the benefits of technology in classrooms in a way that never described exactly how this technology would be applied practically. The videos were gorgeous, but it wasn’t going to work.

Within nine months, the company had begun the process of laying off almost all of its employees, including me. I was relieved.

Author’s Reflections:  My biggest lesson looking back was that I should trust more in my abilities. I thought that because I didn’t have business experience that my co-workers were all better than I was. They were more experienced, but I still had much to offer and my experience and education was specialized and something none of them had. I had reason to be confident and did not need to doubt myself.  I used to send my marketing brochures to the editing department and they’d come back with with grammatical errors and awkward wording. How could that be? I now know that sometimes people are hired for positions they are not qualified for.  I learned quickly that working with good people, not an impressive building to work in,  is key to enjoying a job. 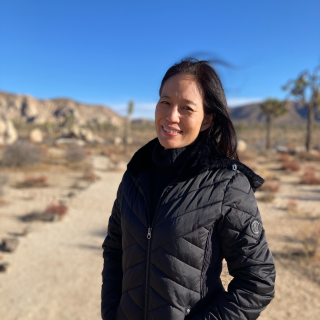